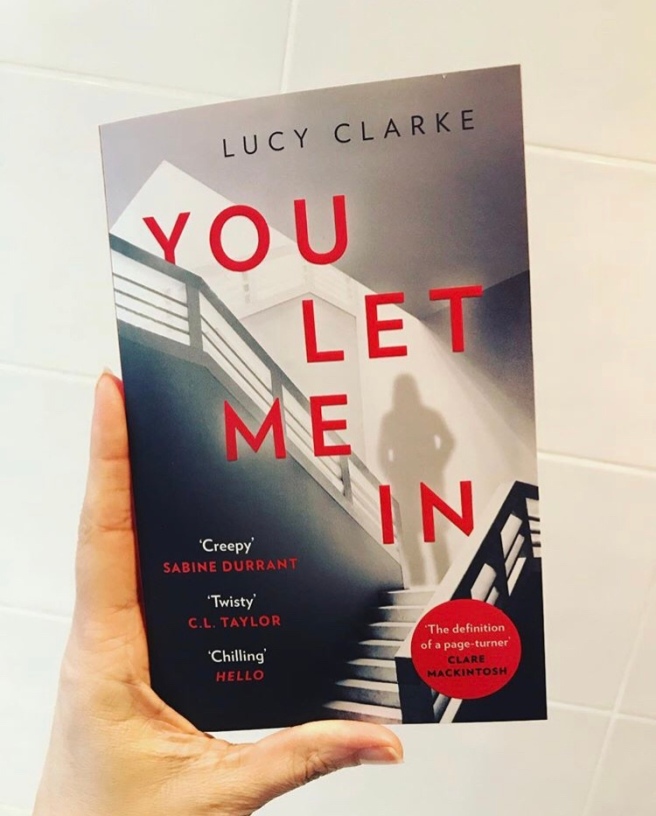 I am going to try sooooo hard not to fall down the thriller cliché rabbit hole with this review but I fear I may fail. I will DEFINITELY say the phrase ‘page turner’ and I make no apologies for this!

You Let Me In by Lucy Clarke was the book that came with my My Book Moment Subscription box which I reviewed here. I read the blurb and instantly new it had the potential to be a goodie. However, at the time of receiving it I was snowed under with proofs to read before publication dates so I had to put it on the back burner (otherwise known as the third shelf down on my book trolley).

Recently I have had a lull in proofs to read and as I didn’t have another one due until mid May I decided to choose a book of my own….imagine the thrill!

Long story short I picked You Let Me In and really enjoyed immersing myself in a pacy, creepy, hair raising thriller.

Our protagonist is Elle is an author who’s debut novel shot to the top of the best seller list and in turn shot Elle into a life in the limelight. To the unassuming observer she appears to have it all, a successful career, a beautiful bespoke built 3 storey house on the coast of Cornwall, the fame and the acclaim. Elle indeed likes to perpetuate this myth by posting the perfect little pockets of her life on Instagram and Facebook for her avid fans and followers to see.

However, behind the facade, Elle is struggling. Massively. Her marriage has fallen apart and she has separated from her husband Flynn. She is expected to deliver a second book very soon, a book which she is yet to start writing. Elle is fresh out of ideas, and the pressure of keeping to her deadline in order to keep her extravagant house is getting to her.

Elle decides to go to a writer’s retreat in France for a break. Whilst she’s there she lets out her beautiful house to an Airbnb customer. Something her brother in law has persuaded her to do. Elle sees no harm in it given that it will generate some much needed cash and her sister, Fiona, has offered to keep an eye on the family who are renting the house.

What could possibly go wrong?…..

On Elle’s return, something doesn’t feel quite right about the house. She finds a few belongings left behind which could indicate that a family have stayed there but Elle has her doubts. When she discovers that an ornament which had been locked away in her writing room at the top of the house has been broken, Elle’s fears begin to spiral.

Various other events and findings give Elle a strong sense of unease and when she tries, and fails to contact the family who were meant to have stayed in her house her imagination begins to run wild. Elle’s worries start to take over her life, suffering from intense insomnia, writers block and high levels of anxiety at every little noise and creak in her isolated coastal house.

But just who had been inside Elle’s house? And what if they haven’t left?….

Right, I’m going to say it…….this book is the epitome of a page-turner! The building levels of tension are immense! I do enjoy a good thriller but this one for me is next-level!

It combines three of my favourite elements perfectly. A dual timeline narrative, we hear about Elle’s university life in flashback sequences and an event that happened there. We also get the story from the perspective of the person who rented Elle’s house out. We then have the unreliable narrator element which I LOVE. Elle is suffering from insomnia and is so bone tired and exhausted that she begins to question herself about what she has seen and heard which then makes us, the reader question Elle. Finally a house, somewhat isolated and creepy af (even though it’s a modern build).

What I absolutely loved was the fact that for much of this book I had NO CLUE who the person who seems to be stalking Elle was! At one point I counted a potential 7 suspects, all of which were either acting strangely or had a motive. Each time I thought ‘right this it, it’s definitely him/her!’ I was proven wrong. However, each time someone was potentially ruled out they were never quite fully ruled out in my mind.

As I say, I didn’t guess who it was or the motives behind it and I’m always grateful when that happens. It makes for a much more satisfying reading experience.

The blurb says ‘stop reading immediately if you’re home alone’ – my daughter read this out to me from the back of the book in a warning voice…..me being me, all brave like, thought ‘nah I’ll be fine’ and then…..

On the window, there is a smear of a fingerprint. Looking more closely I can make out a word written in the faint condensation.……HOUSE. As I’m considering the word, something within me turns cold, like splinters of ice spreading and branching along the back of my neck, down my spine. It isn’t just a single word. Three others are stacked above. I’M IN YOUR HOUSE.

Well…..reading that late at night on your own in bed gives you a little…..chill, shall we say.

This is probably one of the best thrillers I’ve read in a while. With a plausible plot line and enough red herrings to keep you interested. It is a book I know I will be recommending to a lot of thriller lovers. In fact I already have!

Pick yourself a copy up if you like the hairs on the back of your neck to stand up whilst you’re reading…..at night…..alone.