I’ve fallen back in love with reading over the last month or so.

Not that I ever really fell out of love with it exactly, we just maybe had a couple of tiffs as all good lovers do.

I think I got a bit bogged down with some chunky books in the run up to Christmas and lost my flow a bit.  The books themselves were awesome:

BUT I think I needed just to tear through some shorter ones and get my mojo back, and dear reader….I have done exactly that.

I have read 7 books in January and started my 8th (another chunky one but oh so brilliant, more on that another time).

I’m going to briefly sum up my January 7 for you, read on if you’re interested…….if you’re not then why aren’t you?….

I luh-huv Sarah Waters writing and have mentioned her on here before.  The first book I read of hers was The Paying Guests which was so not what I assumed it would be.  It went far beyond my expectations.  Fingersmith was another cracking read.  So good in fact that I finished it and immediately ordered the DVD of the BBC mini series. (Not had time to watch it yet though).  Fingersmith is set in Victorian London (which I have a new lust for, again more on that another time). It centres around two young girls, one destitute ‘fingersmith’ which essentially means pickpocket and one privileged niece of a wealthy book collector and how their lives intertwine when the  fingersmith is sent to work as a ladies maid for the wealthy girl to infiltrate her dull but pampered life in order that her con man friend known as ‘Gentleman’ may marry her and rid her of her fortune.  It has many twists I didn’t see coming, quite grim and in parts a bit gruesome but fascinating all the same. Can’t wait to crack on with the DVD. 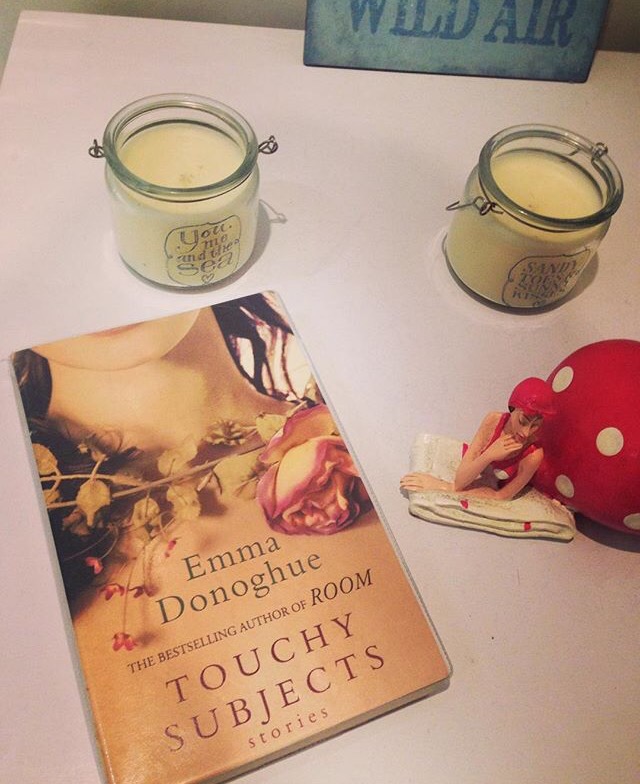 This was a short story collection revolving around as the title suggests ‘touchy subjects’.  Some were quite serious, upsetting subjects such as miscarriage and post natal depression and some were more light hearted.  My favourite of which was probably the one about a man who couldn’t tell his wife she had a massive hair growing under her chin.  (Could have been written by my husband but I think we’ll leave that hair…erm I mean there!).

Sooooooo disappointed by this.  Totally unbelievable plot line and appalling characters…..not for me. That’s all I’m willing to say on it.

4. The Sea House by Esther Freud:

I’d not read any Esther Freud before I picked this one up on a whim in a charity shop but I must have enjoyed it because I got straight online and ordered another of hers called The Wild. This one was one of those stories told in two separate time periods in the same place, you get me?  This story was based around Lily who rents a cottage in a seaside village to study and research the life of a famous architect who lived in the area.  It then flashes back to the time of the archictect (Klaus Lehmann) and the things happening in his life at the time.  Lily quickly becomes involved in Klaus’s life told in the form of letters he wrote to his sweetheart Elsa.  This in turn makes Lily question her own relationship with her boyfriend Nick.  I LOVE stories that cross over two time periods so if you know of anymore please let me know.  Love you xx

5. The Light Between Oceans by M.L Stedman:

Now this book I ordered after watching the trailer for the film at the cinema, and I mean literally just after watching the trailer, yes I was one of those dickheads with their phone out in the cinema, ssshhhh!  This book is amazing! Heartbreaking and gut wrenching.  I quite literally sobbed at a part near the end and I don’t do crying lightly my friends.  I passed this book on to my husband and he did exactly the same….I’m sure he won’t mind me telling you (although if he does it’s tough now I’ve hit ‘publish’).  This is the story of Isabel and Tom who live on a remote island in Australia where Tom is the lighthouse keeper.  Its set just after the first world war.  Tom and Isabel have a lovely marriage and life on remote Janus but they have suffered the loss of three babies through miscarriage and still birth.  One day a boat washes up on the island with a dead man inside and a live baby…..Isabel persuades Tom to keep the baby and pass her off as their own and the story and all the repercussions of their actions unfold from there.  Read it (only when you are emotionally stable! You have been warned!).

6. The Almost Moon by Alice Sebold:

I picked this one up because I really enjoyed ‘The Lovely Bones’ and ‘Lucky’.  This was totally not what I was expecting at all.  With a soft name like ‘The Almost Moon’ and lovely lilac cover with a flower on it I was defo not expecting it to open where the protagonist had just murdered her Alzheimer’s suffering mother.  The story then follows the next 24 hours following the murder and dips back into the past to show how difficult the relationship between mother and daughter had been over the years leading up to the day of the murder.  This book looks at mental illness and the effect it has on family members and friends. It’s grim and dark and shocking. BUT I still enjoyed it……weirdo.

7. The Girl On The Stairs by Louise Welsh:

This one had been on my TBR shelf for over 12 months I reckon.  I grabbed it because it was fairly short and I wanted something contemporary that was a quick easy read.  Again, another dark story which was a slow burner on the creepy scale.  Insidious and sinister but not ‘in your face’. The story follows Jane who is Scottish but has just moved to Berlin to be with her girlfriend Petra and have their baby.  She is quite alone in an unfamiliar city and finds herself getting obsessed with a young girl called Anna who lives with her father in the apartment above.  Jane is convinced that Anna is being abused and is hell bent on saving her whether Anna wants her to or not. I enjoyed this one and need to look up more of Louise Welsh’s stuff.

The book I started after this one is called The Crimson Petal and The White.  Its huuuuge but oh so good! I don’t want it to end! I will review this one separately as it falls into February’s books anyway but I think it deserves a blog post all of it’s own.

So that’s me book wise for January.  I think the blog might take a little bookish turn but won’t always be about books/reading.  I’ll still be here waffling rubbish about my life, diet, anxieties, kids etc.

I hope you’ll stick with me.