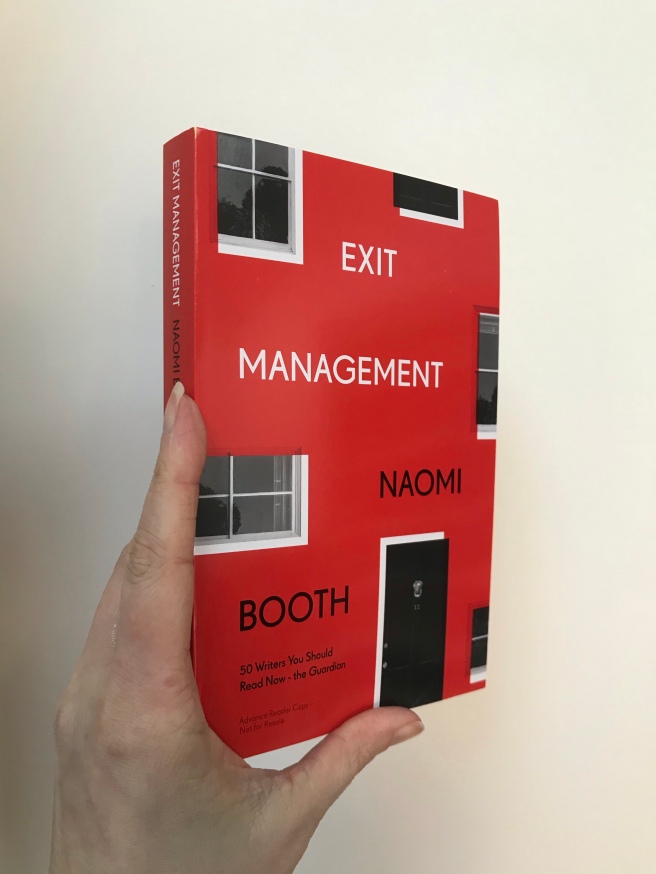 I read and really enjoyed Sealed by Naomi Booth last year. When the lovely Jordan told me that she had a new book coming out I knew I had to have it!

Exit Management for me is one of those books that you pick up, read the blurb and are still not quite sure what you’re in for. When I started reading, it very quickly became apparent that this book wasn’t like anything I was expecting.

Exit Management tells the story of two people, Lauren and Cal, both in their late twenties and living in London. Lauren works in the world of HR for a huge corporate outfit. Essentially her role is to facilitate the smooth exit of staff who are being ‘let go’. Lauren has dreams of becoming more than just a HR worker and has lofty aspirations to live in an up and coming affluent area in an impressive house.

She feels that she is more than deserving of this and is desperate to slough off her old life in the North of England where her troubled mother and sister both still live. Well they don’t ‘live’ exactly, they stagnate. Lauren has no time for this or her past.

Cal works for a property company as a ‘Property Curator’ which is essentially a caretaker of sorts, checking high end properties are prepared for their wealthy paying guests. He looks after a really nice house on Elgin Mews which belongs to an older gentleman, Joszef.

As with Lauren, Cal has aspirations and dreams. He lives with his parents in a block of flats in Croydon and is desperate to prove to them both that he can be successful. He wants to make them proud of him.

Cal has a very special relationship with Joszef, they become close and bond over Joszef’s stories of his past and his love of art. Joszef has an illness and has to go away for a while to recouperate and suggests Cal stay at the house to look after it. Later when he is wanting to return home, Joszef floats the idea of Cal becoming his carer, to which Cal accepts.

Cal and Lauren bump into each other outside Elgin Mews one day when Cal has been making one of his visits to check the property and Lauren has been wondering the streets admiring the lavish houses and allowing herself to daydream.

Lauren assumes that Cal is the owner of the house and Cal allows her to run with this assumption. The lives of all three characters then intersect and merge and we come to discover the darker side of human nature where success and self worth are involved.

Lauren is extremely driven and ambitious. Anxious to distance herself from her working class northern upbringing and almost re-invent herself in the south and prove people wrong. She is very aware of the person she must portray herself to be in order to impress the people she believes matter.

Cal on the other hand is an altogether more gentle soul. He too wants to prove his success to his parents but he is less cold and calculating than Lauren. His relationship with Joszef, an ailing and lonely old man shows his caring and empathetic side which is in sharp contrast to Lauren.

Whilst all of the three main characters in this book have their failings, they are mostly attributed to the very real aspects of the darker side of human nature, elements of which rear up in us all from time to time.

Naomi Booth’s writing is smart, incisive and super sharp. She is such a refreshing author who makes you think about things instead of handing everything to you on a plate. Her short, snappy almost staccato style forces the story along at a pace. Mirroring the hustle and bustle of central London life.

This is for sure a character study and delves deep into human nature and all its flaws. It brings to the fore moral dilemmas which force the characters to examine their own value and worth.

This book is so far removed from Naomi Booth’s Sealed and I love that about an author. I like to be wrong footed and not quite sure what I’m in for. I will certainly pick up anything she writes in the future.

I would thoroughly recommend you get your hands on a copy. Thanks as always to Jordan and Dead Ink for my review copy.

2 thoughts on “Exit Management By Naomi Booth – A Review”