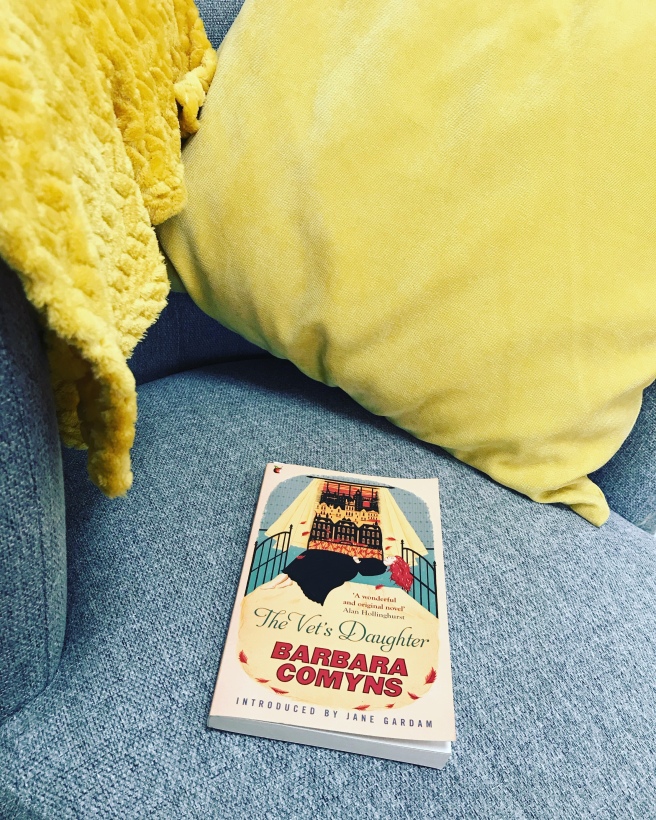 This wonderful book came into my life via my Mr B’s Emporium monthly book subscription.  I trust their choices implicitly because they really took the time to listen to my likes and dislikes when I had my consultation with them before my subscription started. They gave me a good going over as it were!

The cover of The Vet’s Daughter by Barbara Comyns intrigued me and put me in mind of the cover of The Book Collector by Alice Thompson (and also gives a clue or two about what the book could be about but that’s all I’ll say on that!).

The story is told via the first person perspective narrative of seventeen year old Alice Rowlands, the daughter of a vet in an unnamed Edwardian London suburb.  Alice’s father is a tyrant, an evil tempered man who treats both Alice and her ailing mother with utter comtempt and as more or less slaves in the home.  Alice’s mother is a timid woman who is gravely ill.  She tries her best to tend to her brutal husband’s needs and keep the home in order.  When she can no longer disguise the pain she is in, they enlist the help of housekeeper Mrs Churchill, a no nonsense woman who Alice comes to rely heavily on. Alice’s father seems to despise her mother even more during her illness, particularly when she becomes bedbound.  He even has the audacity to send the undertaker round to measure Alice’s mother for her coffin before she has even died, Mrs Churchill sends him away with a flea in his ear!

‘ I didn’t look after Father as well as Mother used to, and he often hit me because the bacon was burnt or the coffee weak. Once, when I had ironed a shirt badly, he suddenly rushed at me like a charging bull in a thunderstorm, seeming to toss the shirt some way with his head. I held onto the kitchen sink, too afraid to move. He came up at me and I saw the whites of his eyes were all red. He was only wearing his vest and trousers and was dreadfully hairy. He seized the arms of the shirt and was trying to tie them round my neck with his great square hands, when the parrot suddenly started to give one of its awful laughs. Father seemed to go all limp and stumble from the room, while the parrot went on laughing’.

After Alice’s mother’s inevitable death, Alice is left to be the homemaker and is at the mercy of her Father’s violence and rage. When he takes up with a new lady friend, the brash and bawdy Rosa (dubbed The Strumpet From The Trumpet after the name of the cafe she waitressed at) Alice is further ostracised.  Alice doesn’t get on with Rosa, who is desperately trying to fix Alice up with a n’er do well waiter she knows, and when Alice is attacked by said waiter Rosa is expelled from the Rowland’s house.

Alice is then sent away to the country to become a companion to the mother of one of her father’s fellow veterinary colleagues a Mr Peebles (who Alice nicknames ‘Blinkers’).  It is here that she discover she has a dubious ‘gift’, something which she is able to do at will and which sets her apart as ‘peculiar’ to everyone else.  A skill she wants to hide and bury.   When tragedy strikes at the home of Mrs Peebles, Alice is boomeranged back to London and her Father’s house, where her striking ‘talent’ is discovered by her Father, who then attempts to exploit it for his own selfish gain.

Plot wise, that is all I want to tell you.  This is a book you need to discover for yourselves! a rare and brilliant gem!

There is such an underlying unease within the pages of this book, not only due to the magical realism which really comes to the fore in the latter half of the book, but also down to the sinister behaviour of Alice’s father and the odd and quirky peripheral characters who are larger than life but not always likeable!

Added to this there is the strange setting of the vet surgery being in the Rowland’s home.  The noisy parrot who pulls out it’s own feathers and has to be comforted in the bathroom, the cages of barking dogs and mewing cats, the cacophony of animal noise and odours and the mongoose who lives in the kitchen for a time.  There is also a creepy vivisectionist who makes regular visits to the surgery to collect any bodies of animals that the vet himself cannot re-home or have use for.

I have always said that I love books where things are slightly ‘off’, not quite right with a hint at the surreal.  This book is the absolute perfect example of this.  One review I read described Barbara Comyns’ writing as ‘offbeat’ and I would wholeheartedly agree with this.

It is arguably a grim read, depressing and gut wrenchingly sad in places, but the prose is so stark and unflinching.  I have often seen reviews that say ‘not a word was wasted’ and I think now for the first time having just finished this book,  I can fully understand the meaning behind this.

Alice herself is such a lovable character, she comes across as quite naive and maybe that is due to her age but also to her guileless sensibilities.  She seems to take life at face value and accept that of course her father will hit her, of course he will deride her and of course he will find her contemptuous.  There is almost an acceptance that this is how her life is meant to be, which of course is so sad in itself.

I read the end of this book whilst I was on my lunch break at work and immediately wanted to go and speak to somebody about it.  It is shocking and heartrending and still plays on my mind even now.

Since reading this book I have bagged myself 4 more of Barbara Comyns books. I took Sisters By A River out from my local library and read it within about 2 days, another quirky, dark tale but riddled with humour. Then I read The House Of Dolls (one of her later books written in the 80’s) telling the darkly humorous tale of a group of middle aged ‘escorts’ shall we say, who live on the top floor of one Mrs Amy Doll’s house.  Set in the 1960’s this is another quirky tale shot through with Comyns inimitable humour.

I have also bought The Juniper Tree and Our Spoons Came From Woolworths, they are secondhand copies which I have yet to read.  I don’t want to gobble them up too quickly, I want to savour them!  There are other Comyns books but some of them are quite rare and quite pricey so I’m going to have to do some research!

If you enjoy offbeat, quirky, sometimes darkly humorous fiction then you need to give Comyns a whirl! I feel so lucky to have discovered her, her writing is a complete and utter joy.

Let me know if you’ve read any of books. I’d love to chat about them.