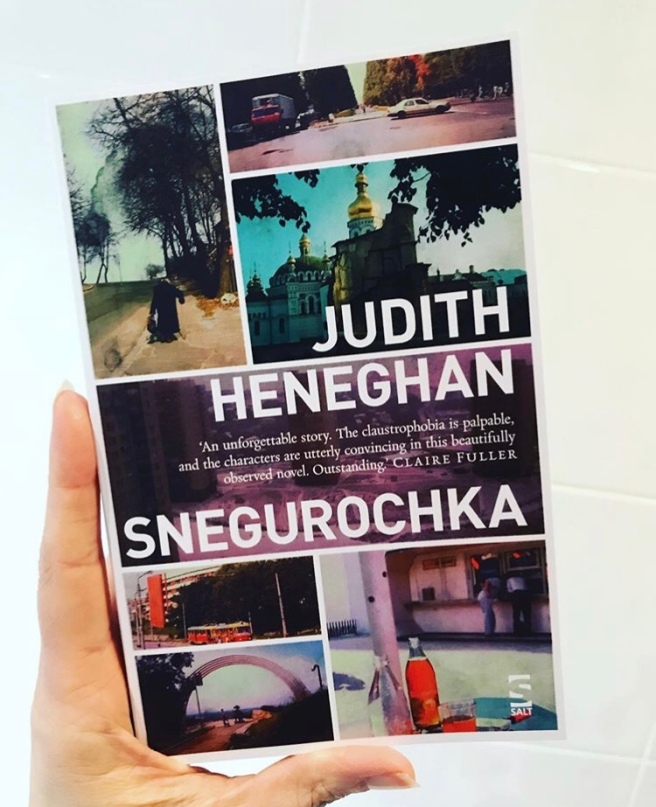 I saw Jen Campbell talking about this book on her YouTube channel recently and it was the struggling new mother element that I was immediately drawn to.  I think I have mentioned in previous blog posts how I am always fascinated by those early days of motherhood, particularly when the mother is not finding it very easy.  This is mainly due to the fact that I didn’t take to early motherhood very well myself, but now that my children are way past the baby stage (they are 10 and 13) I feel like I am sufficiently far away enough to not feel ‘triggered’ for want of a better word by other struggling mothers’ stories.  In fact I find I have quite an affinity with them.

Snegurochka by Judith Heneghan starts with new mother Rachel moving to Kiev in the Ukraine to follow her BBC journalist husband Lucas in his career pursuits.  The baby, Ivan, is only 3 months old when she makes the journey over and already Rachel is struggling to cope.  On her arrival in Kiev she is greeted by her new home, an austere tower block, on the 13th floor of which is her flat. It is 1992 and the Ukraine has not long gained independence from the USSR, the Chernobyl disaster occurred a mere 6 years prior to this, the repercussions of which are still very much being felt.

Being 13 floors up unnerves Rachel and she has a particular fear of going out onto the balcony which is just off the living room.  She has visions of herself letting baby Ivan drop over the edge of balcony to his certain death.  These images plague her and she has to comfort herself with various obsessive rituals in order to keep her anxiety levels manageable and most importantly to keep her baby safe. She has counting rituals, going over and over the same pages of words in the same book (Jurassic Park), she counts and neatly orders her diminishing supply of Pampers nappies for the baby, she counts groups of words and mutters the same phrases over and over.  If she is unexpectedly deviated in some way from her rituals she becomes increasingly anxious.  Going anywhere near the balcony is completely out of the question.

Rachel looks down, still bewildered by the sight of her white arms cradling her son with the small brown spot above his right ear that will one day be a mole, his eyelashes like tiny scratches and his pink, almost translucent nostrils. Earlier, in the living room, she had glimpsed Ivan falling. Such visions she knows, must be dismissed with a sharp shake of her head before they can fix themselves like premonitions, like memories, but Vee had been watching her so she hadn’t moved. It’s a long way down from the thirteenth floor. Five seconds, she thinks. Maybe six…..

Lucas is working long hours and has to quite often drop everything and chase a potential lead for a story.  He is extremely ambitious and is desperate to prove that moving his wife and baby son over to the Ukraine has been worth it.  He wants to make a name for himself as a good journalist and wants to be the one to discover the next big scoop.  In doing this he does lots of networking and has already made a few friends to socialise and talk shop with before Rachel makes it to Kiev.  Rachel has to infiltrate his world or end up isolated on the periphery.  At first it is just herself and the baby, left to their own devices a lot.  She walks the streets with Ivan in his pram, garnering disapproving looks from the old women, who seem to be disappointed that she has brought a new baby from a land of plenty to a place where fresh produce and many items besides are in short supply. One such woman is the caretaker (or dezhornaya) of Lucas and Rachel’s building Elena Vasilyevna, a woman who Rachel is initially very dubious of with her disapproving looks and taciturn demeanour. A young boy Stepan who lives in the apartment above Rachel and Lucas also becomes involved in the narrative. A boy who sees things from the periphery and has allegiances of his own.

Stepan’s job is to hold each jar steady while Elena stands on a stool and ladles in the soft purple heads. When the lids are secured and the jars are wiped clean she will store them beneath the stairs with the bottled pears and tomatoes, the trays of chitting potatoes and the onion seeds in their twists of yellowed newspaper. If he likes, decides Elena, he could help her in the spring. She could start him on some digging.

Stepan screws up his face as the steam rises in vinegary clouds. He’ll want payment, that’s obvious, and he has a taste for preserved cherries so for now she will give him half a jar. Elena knows about hunger. She knows how starved limbs swell, how skin becomes shiny, almost see-through, before it splits open and the body’s fluids leak out. Famine eats you from the inside. When winter comes, hold on to what you’ve got.

Life is hard in the Ukraine and the only way to procure certain items, for example white goods, seems to be via underground rackateers and ‘fixers’.  Rachel becomes inadvertently embroiled with one such gangster when a favour is misconstrued.

Rachel forms a falteringly tenuous bond with Elena, Stepan and Zoya, Lucas’s fixer with secrets and problems of her own to bear. This eclectic mix of people thrown together by circumstance, each surviving their own battles is such a compelling group to observe.

I also enjoyed watching Rachel develop as a mother, find her feet not only navigating the unknown lands of early parenthood but literally navigating the unknown land that is the Ukraine.  I also was intrigued by the relationship between Lucas and Rachel, the stresses of parenthood and the move to a new country when one of the couple has already had the opportunity to be come acclimatised and find their feet, leaving the other person playing catch-up in the mystifying ways of a whole new culture.

Judith Henegen’s writing is expertly evocative. I could really get a strong sense of what life in the Ukraine was like at that time. I even felt cold reading about the stark, bleak, bitter winter.

There is a very distinct and haunting sense of unease running throughout this book, which I love.  I was constantly questioning every characters motives and behaviours. With an almost claustrophobic quality, Judith Heneghan’s story telling skills are superb. She crafts a very compelling story which builds tension at a perfect pace.

Whilst this is a fascinating story of the people of Kiev, it’s social landscape and events of the time, it is ultimately a portrait of a marriage and motherhood, which held me captivated.

I would thoroughly recommend this book. I very much enjoyed it.

Thank you to Salt Publishing for my review copy.

4 thoughts on “Snegurochka By Judith Heneghan- A Review”