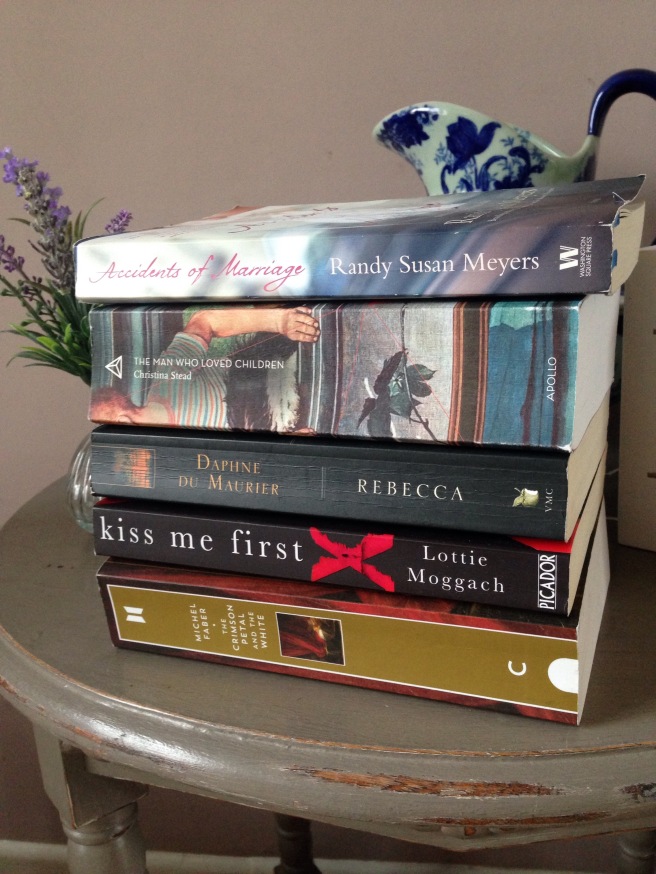 I was planning on doing a monthly ‘wrap up’ of all the books I’ve read.  That’s what all the best Booktubers do.  (I am not a booktuber…..yet).  However, tying myself down to definite blog posts messes with my head (delicate little flower that I am!) and gets in the way of my ‘lying down stuffing chocolate buttons in my big fat gob’ time so I plan to just do the odd Reading Wrap Up every now and again. I’ll be doing ‘Haul’ posts too (see I know allll the lingo), which will basically be showing you the books I’ve bought, begged or borrowed.

That ok with you?

So, lets crack on with the books I read in February.  A real mixed bag of 5 Star stuff and some utter rot.

The Crimson Petal And The White – Michel Faber

I started this at the end of January and finished it in February.  Its a chunky one but I zipped through it because it was so chuffin good.  So good that I did a standalone review blog post here.  I won’t blether on about it anymore here.  If you like rip roaring historical romps with a dark twist then go check out the review….or just dive in and read the actual book.  You won’t regret it. Promise.

This one had been on my TBR shelf for a good while.  I picked it up after The Crimson Petal because I fancied something contemporary, I’d been stuck in history for too long my friends.  This is a story about Leila, a virtual recluse who, after the death of her mother, spends too much time in an online world.  She is approached by the moderator of a philosophical debate type forum to help a woman to disappear and commit suicide without hurting her family.  The plan is that Tess (the woman who wants to die) will go off somewhere secret and do the deed as it were, and Leila will continue her online life (via emails and Facebook etc), gradually decreasing the contact with friends and family in the hope that they will accept that ‘Tess’ has given up on them.  I really enjoyed this one, it felt frighteningly possible and well within the realms of possibility.  I think I need to see if Lottie Moggach has written anything else.  Well worth a read.

This year I want to read more of the classics.  I have never read Jane Eyre, Wuthering Heights (although there’s a vague school memory of this one…..but that could just be the Kate Bush song……’Heeeeathcliffe! It’s Me, Oh Cathy, I’ve come home now!’ you know the one).  I’d heard great things about Rebecca and Daphne Du Maurier as an author.  Jamaica Inn and My Cousin Rachel I’d heard of but Rebecca seems to be the iconic Daphers novel everyone raves about.  Well…….I blinkin loved it! Set in the 1930’s (I think) it tells the story of our nameless protagonist, a lady’s companion who meets  enigmatic widower Maxim De Winter (fabulous name!).  She marries him and returns to his estate of Manderley.  She lives forever in the shadow of Maxim’s now deceased wife Rebecca.  The staff in the house all loved her, in particular the awful Mrs Danvers, who is quite possibly the best ‘baddy’ in any historical novel I’ve read so far.  If it were panto we’d be booing her.  I loved the way she was described as:

‘tall and gaunt, dressed in deep black, whose prominent cheek-bones and great, hollow eyes gave her a skulls face, parchment white, set on a skeletons frame’…..

Oooh sends shivers down your spine.

The story centres around the effect the infamous ‘Rebecca’ has on the marriage and what actually happened to her?……Its beautifully written in such great detail and draws you in right from the get go.  About two thirds of the way in there was a moment when I was reading it on the bus when my jaw dropped.  A moment I wasn’t expecting.  This book is the kind of story that lingers with you long after you’ve read it.  I’ll definitely be reading more of Daphne’s stuff in the future.

Oh man…….what can I say about this book?…..I desperately wanted to love it because I fell in love with the cover instantly.  It’s probably the most beautiful front cover of any book I’ve ever read. However………

This is probably the most boring, odd, cringeworthy book I’ve ever had the misfortune to read.  Add to this the fact that it’s soooooo looooooong! reading it was like purgatory.  People were telling me to ditch it, life’s too short for boring books.  But I NEVER give up on a book and this one became my nemesis, like an albatross around my neck.

I’m hard pressed to tell you what it’s about to be honest.  This I do know, the mother and father characters (Sam and Henny) were the vilest creatures I’ve ever come across.  They have 6 children between them, 5 of which are from their marriage, and one, the oldest at 11 Louie, from Sam’s first marriage.

The story as far as I can gather is about the awful relationship between Sam and Henny, they communicate with each other through the children and notes that they leave for each other.  They both appear to despise poor Louie and treat her terribly.  Sam likes to think he is the perfect father, he talks in his own made up ‘baby ‘ language to them which when reading it made me want to hurl…check it out:

“Bring up your tea, Loo-loo girl: I’m sick , hot head, nedache (headache), dot pagans in my stumjack (got pains in my stomach): want my little fambly around me this morning.  We’ll have a corroboree afterwards when I get better.  Mother will make the porridge”….

Is that not the most cheesily awful sentence you’ve ever read?…..there’s loads more of that throughout the book.  Sometimes this book was engaging, other times it was literally just a jumble of nonsensical words thrown on a page.  Lots of times I didn’t know if it was New York or New Year…baffling!

This book is described as a ‘neglected classic’….it should have stayed neglected in my opinion.  I was so let down. BUT it has made me want to buy a print of the Norman Rockwell image on the cover.  That’s all I can credit it for.

This was a quick easy read.  It tells the story of Ben and Maddy and their 3 children.  Ben has anger issues which one day boil over and end up causing a road traffic accident which puts Maddy in a coma.

We follow the story through Ben’s eyes, Maddy’s eyes and their oldest daughter Emma’s eyes.  After Maddy emerges from her coma we see the effect Ben’s temper has on her recovery, their marriage and their children.  Not an easy subject matter but I enjoyed it. A good read.

So those are my February books.  Two massive beasts, one amazing, one diabolically rubbish, two contemporary, three historical.

I wonder what March will bring…….